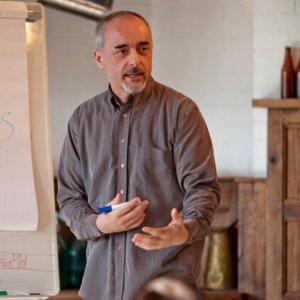 So you are a tv and film director. How did you come about following this career path?
I always loved cinema, and I’ve been writing since age 11, but didn’t really think of it all as a career until I started working in TV as a reporter. This is when I realised that I’m much more interested in being behind the camera and putting it all together than standing in front of it, talking.
What excites you about this medium?
Everything! I love the whole process. Pre-production – the team brainstorming, planning, testing stuff, rehearsing with the actors; then love the production itself – finding the perfect shot, seeking moments of truth in performances, the perfect something or other; and then it all begins all over again in post – editing, making the magic really happen by putting seemingly disparate elements together, finding the right music, the right colour grade, the right sound effect, and on and on. It’s a complex, layered all-consuming experience – body, mind and spirit. It’s like a drug.
What excites you about theatre, do you have different techniques for theatre and film when directing?
Theatre has its own kind of magic. I love the fact that I can rehearse much more. It’s like being locked in a room with all the cool kids and we can just play, experiment, try many different ‘what ifs’, reimagine the text and – when it’s really good – reimagine ourselves, too.
What do you think is important when collaborating with writers and actors?
Communicating. Communicating in an open, encouraging and empowering way. Listening. Trying to truly understanding where they’re coming from – what are their ideas, what are their concerns. With writers specifically, it actually starts with listening, of course, understanding their original vision, the point they started from.
What do you expect from an actor if they come into audition and also in rehearsal time?
Auditions are like a first dance – both partners are discovering whether they can dance together. This is nothing to do with how good they are at dancing, but everything to do with – do we make a good dancing match. So, in auditions, I just want the old cliché – be yourself. It’s the only thing that will ever work. Whether I have a clear idea of the character already, or I am still searching, when the ‘right’ actor comes in, it feels like they’re the only ones who know the correct answer to the hardest question in the quiz. In a way, there’s nothing you can do about it. The second thing I look for, and this is if I’m intrigued by the actor’s energy/persona and sense that they might be right, I want to see responsiveness. If I ask them to do something different and they essentially give me the same thing again, I won’t choose them.
In rehearsals I want trust. I do my utmost to build this trust with the actors, of course, it’s my responsibility too, but ultimately we need to get to a point of trust. And I’m also looking for openness to ideas, playfulness – let’s try if something will work, if it doesn’t we’ll ditch it. Finally, I expect contributions. Just like the heads of various departments will offer their own ideas for the look, feel, sound of the film, the actors need to contribute ideas, too, and again – we’ll try some of them out, if they work, we’ll use them, if they don’t, we’ll at least inspire each other to cmd up with other ideas.
What projects have you in the pipeline?
There are several projects in the air, at the moment. Perhaps, the most likely to go ahead first is a feature film comedy, then a theatre play commission which I am yet to write. Wish me luck, both are really exciting, and totally different from one another.
In the current climate with funding being cut everywhere, when starting a new project how do you tackle this problem ?
Keep going. Keep going. Keep going. There’s no formula and no unseal solution. Keep pushing, knocking on doors, making new friends, searching for new leads and connections. Perseverance is everything.
Fun- What’s your favourite film
Ha! The impossible question. In no particular order – Life of Brian, Groundhog Day, Donny Darko, Apocalypse Now, Persona, Bicycle Thieves, The Big Lebowsky, All That Jazz, Baz Luhrmann’s Romeo&Juliet, The Red Shoes, Ex Machina, and on and on and on… This year, Arrival was so exciting!