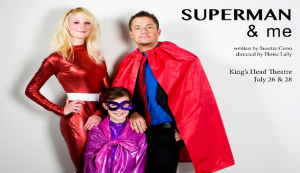 We interview Eloise Lally about her current role as director in ‘Superman and Me’ written by Suzette Coon and on at Kings Head theatre July 26-28th
Has theatre always been a part of your life? What did you want to be growing up!
From a young age I have always felt most connected to myself, those around me, and the world through artistic expression. I had a curiosity with language and the ways in which it could be used to move and excite people. I remember reciting poems I had learnt by heart at 3 or 4 years old, coaxing my brother into playing characters with me who existed in fantasy locations, and I was a keen singer. Before I knew what theatre was I seemed to enjoy creating make-believe worlds more than living in the real one. I suppose some children grow out of that, I never did. In that sense, I guess theatre has always been part of my life. Creating different worlds and exploring characters that live within them has never stopped fascinating me.
Growing up I never had a strong idea of what I wanted to be. I knew that I was happiest performing in school productions or making theatre with friends, so hoped I’d be able to continue that somehow.
How did you veer towards directing as a career?
During my final year at university I read Martin Crimp’s ‘Attempts on her Life’. Whilst reading the play I had an instinctive vision for bringing the narrative to life and decided to see if I could realise it through directing. Whilst rehearsing the piece, I found that I was much more interested in thinking about the whole story rather than focussing on the journey of one character, as my previous experience in performance had informed me. I knew I wanted to go to drama school to learn more about what being a director means and that’s how I found myself studying for an MA in Theatre Directing at Mountview Academy.
What do you like about directing? what are it’s biggest challenges?
I love being able to question and explore human behaviours. The close examination of plays that directing requires teaches so much about humanity. I feel like I am constantly learning something new. I enjoy the collaborative nature of theatre making; the sharing of skills and insights between all creatives involved.
I think the biggest challenge of being a director is being able to work on projects that excite you whilst managing to be financially stable. Directing is sadly still not a very well paid profession. It can be hard to sustain a living from and when your quality of life is dependent on both being able to do what you love and being able to pay the rent, there often has to be a compromise.
What inspires you above live performance such as theatre?
I am always inspired by the work of directors, actors, designers, movement directors, stage managers etc. The possibilities of theatre making seem vast to me and I am always inspired to see how varying groups of creative teams can realize work. I am inspired by the way individuals interpret the world and can use their interpretation in performance to make audiences laugh or cry.
Tell us about Superman and me? How did you get to work with Suzette?
Superman and me is an anti-romantic comedy about coupledom. It is a two-hander exploring traditional gender role expectations. It examines how popular culture has influenced the way we think about what it means to be single and what our role is within a relationship. The piece follows married couple Lois and Clark through couples therapy. It is both sad and funny.
I first worked with Suzette on an extract of a play of hers, ‘Pile of Bricks’ for Paperback Pictures new writing night at The Arts Theatre. I immediately connected to her writing about social and economic issues; things which I felt needed to be talked about through the medium of theatre. Suzette is able to give a light touch to serious global concerns and this mix of sadness and comedy is something that is exciting to work on. I later directed a short play for her new writing night Little Pieces of Gold. It was whilst working on this that Suzette spoke to me about Superman & me.
Superman and me is about relationship dynamics? What draws you into directing a piece like this?
I am interested in exploring how gender expectations impact relationships. I think the play draws from ideas of coupledom that are universally experienced. I want to offer insight into the effect of these expectations on relationships, and ask audiences if they feel a pressure to live up to an idea of what male and female roles in relationships should be. If so, how can this be altered? I believe these expectations are detrimental to mental health and wellbeing. I want to look for ways in which men particularly, can be encouraged to talk openly and honestly about how they feel.
We at Actor awareness think Suzette is great and she’s been a supporter of ours, do you know anything about Actor Awareness? What is your view on our campaign?
I have only recently come across Actor Awareness and think that your campaign is extremely important. Everyone, no matter where they have come from should be entitled to the same opportunities within the arts.
Advertisement